1. Allow the blades of artificial grass to stand upright

The first is that the rubber granule infill allows the blades of artificial grass to stand upright giving the grass a natural appearance.

The aesthetic aspect, and in particular the chromatic appearance of artificial grass surface, may be influenced also by nature and by the characteristics of the infill, essentially, it is considered extremely important that synthetic grass at least looks like natural grass.

The next requirement that had to be satisfied when choosing the material for artificial turf infill was that it would supply a cushioned surface to play on similar to that of natural grass.

Another consideration that had to be factored in when choosing rubber granules as the infill for artificial turf surfaces was the fact that these particular surfaces were going to have to be capable of withstanding higher than normal stresses. The sports that are played on synthetic turf include soccer, American football, tennis, hockey and, more recently, baseball.

When you install artificial turf you are putting in a product that does not grow as natural grass does and so, an aim in manufacturing the artificial grass is to prevent the surface from wearing out in a non-uniform way and a big contributor to the degradation of the surface has to do with the infill. You can imagine that on a football field or soccer field the area in the goal box at either end as well as the midfield area would come under much greater stress than the areas near the corners or the sidelines. A material such as rubber granules provides a covering that will stand up to the constant traffic without becoming noticeably different from the rest of the field over a reasonable period of time.

Similarly, those playing on the artificial turf surface usually wear specialist sporting shoes with some kind of spikes or cleats to maximize the ability to stop and change direction without slipping. It’s inevitable that using this kind of footwear on artificial turf will cause the infill to shift and get knocked out of place. Rubber granules were found to move less than other types of infill such as infill that had a high proportion of sand in its content. 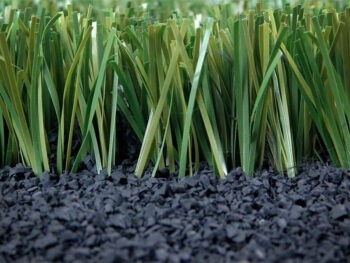 Why Use Rubber Granule Infill for Artificial Turf?

Artificial turf surfaces have traditionally been cushioned by the use of rubber granules. These rubber [...] 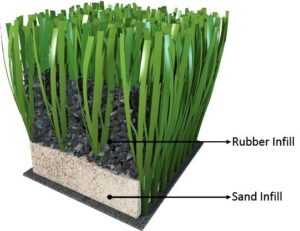 How Much Infill Do You Need For Artificial Grass

SBR infill in has been extensively examined and studied since the late 1990’s. More than [...]